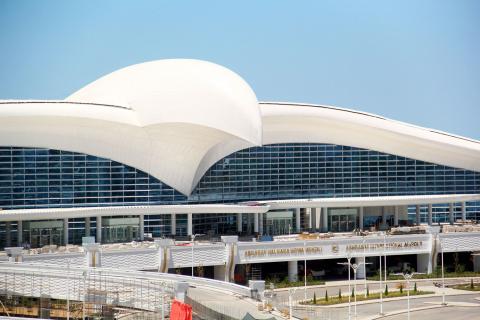 On September 17th, 2016 the president of Turkmenistan Kurbanguly Berdymukhamedov has officially opened a new US$ 2.3 billion dollar ultra-modern Ashgabat International Airport shaped in a form of a falcon (see video below). The entire complex is comprised of 190 buildings spread on a 1,200-hectare site. The airport is designed to handle up to 17 million passengers (remember that number!) combined with 200,000 tons of cargo every year.

At the opening ceremony the president claimed that Turkmenistan has “all the opportunities to become a transport bridge facilitating economic cooperation between Europe, the Asia-Pacific region, and South Asia.” He also added that the new airport was needed to accommodate a massive influx of tourists eager to visit Turkmenistan.

The official position of Turkmenistan, is understandable since the country’s income have heavily depended on the export of natural gas. As a result of plunging energy prices and foreign currency shortages the government is now forced to develop the tourism and transportation sectors of the economy.

There is however an array of problems associated with the new Turkmen initiative. For starters, due to very restrictive visa regulations the country has been visited by anywhere between 7,000 (if you choose to believe World Bank) and 100,000 tourists (if you prefer to rely on official Turkmen government reports). For comparison neighboring Kazakhstan had 4.5 million visitors, while Kyrgyzstan saw more than 2.8 million tourists in 2014.

Here is an additional compilation of facts about Turkmenistan if you are planning to visit that country any time soon:

On the bright side, Ashgabat holds a Guinness World Record for the highest density of white marble-clad buildings as well as the largest indoor Ferris wheel.

So far the official Ashgabat has not undertaken any steps to either address the tourism-related problems outlined above or initiate any trade deals to attract any transportation companies.

In your opinion, why do you think Turkmenistan built this airport?

Please leave your comments below.