The Steppe Winds and the "Virgin Lands"

In 1953 after the death of a dictator Joseph Stalin, Nikita Khrushchev, the new Soviet leader became aware of the serious issues in the country's agricultural sector. Because of the prolonged heavy investments in the industrial and military growth, coupled with a devastating war, the production of wheat, meat and dairy in Soviet Union had plummeted to historic levels. Russia, a traditional exporter of grain, was forced to buy it abroad. 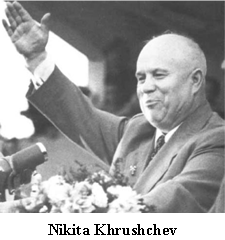 Khrushchev, always an energetic and vigorous party leader, came up with what appeared to be a very creative solution to the grain shortage problem. He proposed to open up millions of acres of "virgin" land in the steppes of Kazakhstan north and east of the Aral Sea.

The overall aim of the "Virgin Lands Project" was to produce 20 million tons of grain by 1956. The project has begun with an army of 300,000 volunteers travelling by special trains to Northern Kazakhstan and Southern Siberia and erecting hundreds of tent cities. Another group of several hundred thousand students, soldiers and agricultural professionals joined them on a temporary basis until the first year's harvest. In addition, 50,000 tractors and more than 6,000 trucks were moved to the area to assist the "project team" in preparing and ploughing the vast areas of land. As a result of these preparations in the first year of the programme, 190,000 km² were ploughed; in 1955, an extra 140,000 km² were ploughed.

The 1956 was a year of great success for the "Virgin Lands"; the original target of 20 million tons of wheat was more than tripled. Mr. Khrushchev and the rest of the country rejoiced. The original idea of investing billions of roubles into the steppes of Kazakhstan looked like a stroke of genius. Thick books were written and large canvases were painted describing the heroic efforts of the people. The project was a great success.

The "Program & Portfolio Management Case Studies" presentation at the PPM conference in Casablanca, Morocco in 2012

The "How To Implement Project Portfolio Management?" presentation at the PPM conference in Casablanca, Morocco in 2012

A presentation I did at the Project Portfolio Management conference in Casablanca, Morocco in 2012

The "Questions and Answers" portion of my Vancouver Board of Trade keynote on project portfolio management. Very interesting and thoughtful comments and inquiries from the participants.

In the modern business landscape where lean resources are the norm, are your teams optimized to deliver exceptional project results? This presentation will focus on the key question facing executives and project managers alike: "what does it take to deliver great projects and/or products?