Negotiation is a dialogue intended to produce an agreement

upon courses of action, not only by actively selling

your position but also by focusing on the other side's

When negotiating on projects, both parties involved default to the discussion of their respective demands or try to state their positions in the clearest ways possible. Dig into your own memories and try to see if you have ever heard the following statements from your clients or managers:

Project managers are also prone to uttering statements like:

The problem with this approach is that we focus on the positions or demands of both parties rather than trying to understand their underlying interests and reasons. We assume that the key to a successful negotiation lies in understanding what the counterpart actually wants. While this is true, it is not the end of the process but rather a beginning. Focusing on what their customers want frequently distracts even the most experienced project managers from why they want it in the first place.

Therefore, questions like "why?" and "why not?" become the project manager's best friends during any negotiation process.

One of the prevailing superstitions in project management is the "fixed pie" assumption. In other words, both sides assume that the project results, speaking mathematically, are binary - either the team delivers the project on time or it doesn't; either the project is on budget or over, etc. Fortunately, negotiations are typically not like NBA Finals when team A meets team B in a seven-game series where the winner gets the Larry O'Brien Championship Trophy and the loser goes home empty-handed.

In my experience, situations on most projects are similar to the fable involving two kids quarrelling over the ownership of an orange. Finally, their father enters the room and, operating under the fixed pie assumption, cuts the orange in two equal halves distributing the fruit between the brother and the sister. Interestingly enough, the brother eats the orange and throws away the peel. The sister uses the peel from her half as an ingredient in pastry while disposing of the fruit.

The situations between customers and project teams are often similar to the fable described previously: the underlying interests, constraints and risk tolerances of both parties are rarely identical. The proverbial pie usually looks quite different to each party. Hence, a good project manager can increase the size of the pie by looking for things that are of low cost to him and his team and high value to the customers (and vice versa).

While trying to understand the underlying interests and constraints of your counterparts is one of the cornerstones of successful negotiations, there is one area that has fairly little flexibility and that is the fairness of the objective criteria used when assessing various dimensions of the deal. All of the inputs into the negotiations process should be reasonable and fair; otherwise you will not get very good outputs. The "garbage in, garbage out" principle, so famous among statisticians, applies very strongly to the negotiations game.  Most project managers have no doubt witnessed biased standards used in project negotiations, such as:

You may, and probably will, from time to time be subjected to pressure that can take many forms. It could be a threat (if you don't do this, you will be fired), a fake appeal to trust (why don't you believe me that this could be done in only six months?) or a veiled bribe (I will seriously consider promoting you to a senior program manager if you agree to this).

Succumbing to these unfair yardsticks is a very dangerous technique to use in negotiations. Just because the customer has heard that a "similar project was delivered in half the time and with quarter of a budget" does not mean that the project manager should instantaneously agree to use this yardstick to assess his or her own projects.

Table 1 lists some of the questions the project manager could ask when dealing with unreasonable stakeholders insisting on using irrational criteria.

We encounter lies in the world of project management on almost a daily basis. Customers hide their actual budgets, while project managers, as one of my colleagues eloquently put it, "think of a random number, double it, then just in case double it again". Lying in negotiations is a frequent phenomenon; we assume that it is easier to inflate the project budget estimate or requirements to obtain the resources.

Alternatively, we are sometimes pressured into decreasing our forecast in order to please our clients or superiors. We justify this behavior by convincing ourselves that everyone lies during negotiations and that by being honest we put ourselves at a distinct disadvantage. This could be true in the short term; e.g. we can obtain a bit of a breathing room by inflating our forecast.

What we forget under the pressure is that, in the long term, our reputations as reliable professionals and our relationships with customers suffer. It takes months, sometimes years to establish yourself as a trustworthy counterpart and to build a trusting relationship with your stakeholders. But if, for whatever reason, you are caught in a lie, the trust and the bond disappears in a flash.  Therefore, it is very important for anyone involved in projects to consider the long-term impacts of lying on your own reputation.

Tip #5: What If They Are Irrational?

"Irrational" or difficult customers are a curse every project manager faces. The interactions between the project managers and the clients, especially during the initiation and planning stages should be frequent and fairly vigorous events. Defining scope, understanding their problems, fidgeting with budget, schedule and constrained resources; all of these activities are fairly challenging even with co-operating and friendly stakeholders. If, however, the customers and your own management are being unreasonable and are not willing to weigh different options by sitting down with the project manager, the experience can become a nightmare.

So, what are the reasons behind such unreasonable behavior? One of the key motives behind such an attitude is the fact that most stakeholders are probably uninformed about the possibilities that negotiations can open for them. Unfortunately, the only alternative for the project manager is to educate the customer about the negotiation process, typically by leading by example.

Another possibility is that your counterparts may not have sufficient authority to address the issues you are trying to raise. In other words, while the project manager is sitting with the customer trying various approaches, the stakeholder is rejecting one proposal after another because he has not been provided with enough decision-making power, but is unwilling to admit to that.

The following section, "Targeting Different Corners" will provide the reader with several hands-on approaches that should help in addressing this problem.

The idea behind the pentagon is that every project has five potentially flexible dimensions: scope, quality, time, effort and budget (see Figure 1). In this model scope and quality are positively correlated with time, effort and budget. In other words, the more features and/or more quality the customer wishes to see in the final product, the more money and people should be working on the project for a longer time. 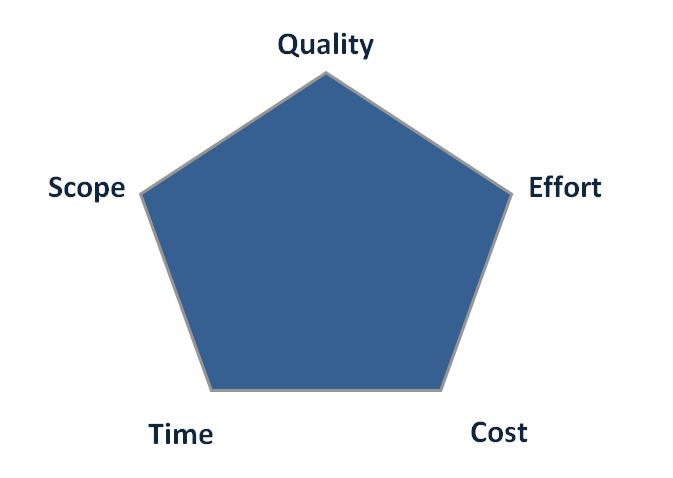 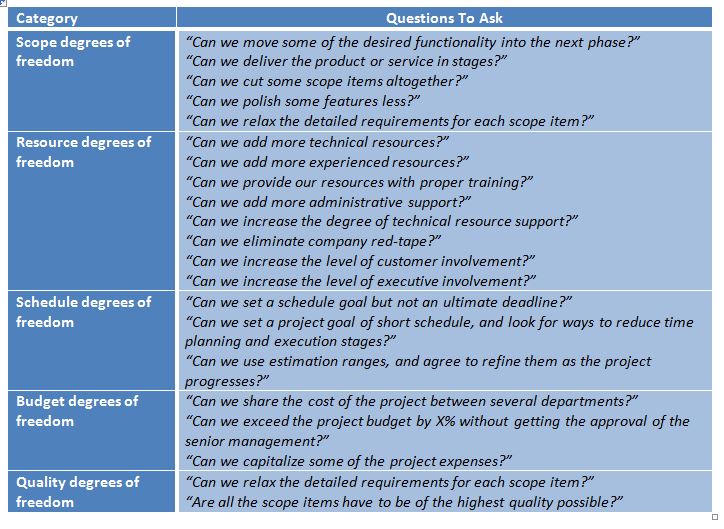 Keep in mind that the questions in Table 2 represent only the starting points in the search for the degrees of freedom. Each one of these inquiries has a potential to unravel into a series of new discussions and, more importantly, concession points from the stakeholders.

A good project manager can take negotiation methodology one step further and really impress your management and clients. Let's assume that you have been given a project that should take approximately nine months to deliver according to your team's objective estimates. Your boss, of course, expects you to deliver the project in seven months. After engaging your management and other project stakeholders in a fact-finding discussion, you can prepare a list of possible scenarios that may look something like those outlined in Table 3.

Why is it a good idea to put several offers on the table? Firstly, it demonstrates professionalism; the stakeholders would definitely appreciate that the project manager listened to their concerns and constraints and prepared not one, but several potentially acceptable options for them. Secondly, it opens three (in this particular example) instead of one, possible doors to a successful project completion.